THE ETERNAL, TRUE, AND UNCHANGING

OLIVIER MESSIAEN, A FRENCH RELIGIOUS composer whose organ pieces are often played in churches of all denominations, once wrote a "Quartet for the End of Time." He was inspired by Revelation 10, which tells of an angel with a face like the sun and a rainbow on his head, who carried the message that there should be time no longer (see verse 6). In his quartet, Messiaen suggested musically that audiences could experience some of the elements of eternity in the present. Two sections in particular, in praise of Jesus, are some of the most moving and tranquil music I am aware of.

What is surprising is to learn of the circumstances under which Messiaen composed the quartet. The year was 1940. And Messiaen was in a Nazi internment camp. Perhaps four instruments he used were those available in the camp. Perhaps even more surprising, the Nazi commandant of the camp gave permission for the work to be performed there.

Dick Nenneman is a former editor-in-chief of The Christian Science Monitor. 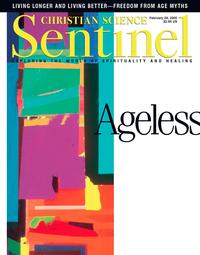