AFTER 26-YEAR-OLD Amy Biehl was murdered in South Africa, her American parents could have chosen hatred and withdrawal. The crime was a racial one—she was killed in 1993 by several members of the African National Congress who were going home after a rally.

Instead the Biehls chose to forgive.

Send a comment to the editors
NEXT IN THIS ISSUE
Article
'Why should I forgive you?' 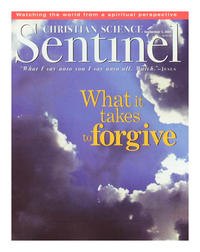