Do you know who you really are?

The convention hall was filling up as a woman made her way to the registration desk. She was given a name badge and an information packet. No sooner had she found a seat for the opening session than a couple engaged her in animated conversation. When they addressed her by name, however, she realized that they had mistaken her for someone else because she was wearing the wrong name badge. A quick trip to the desk rectified the situation, and she had a good laugh with her new acquaintances.

How easily that false identification occurred. Yet it was uncovered and remedied just as easily and quickly. Two important steps took place. First, the woman never accepted as real or accurate the wrong name. Second, she took immediate steps to correct the mistake.

Send a comment to the editors
NEXT IN THIS ISSUE
Article
Clipping, trimming, and cultivating 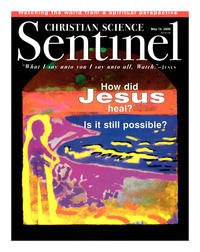