Spirituality: the heartbeat of religion and church

"Awakened to their true selfhood, people realize that they have a spiritual adventure ahead of them."

I RECENTLY HEARD a story about a remarkable woman. She felt as though her life had two chapters—first religion, then spirituality. She had been married to one of those fiery ministers who could fill the church pews until people were standing in the aisles. This man also abused her. Then, she says, spirituality saved her life. Whether or not the story is true, it certainly made me stop and think.

Spirituality can mean many different things to different people. So perhaps it's best considered in terms of its effects. Those effects include more assurance of one's worth as an individual, more patience, compassion, and unselfish living. 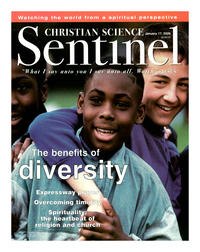