"Of the household of God"

"This is for you," she said as she took the banana from her handbag. It was a generous gesture to me, someone she'd only known for one hour. In this recently liberated Eastern European country, such fruits had once been available only at Christmas, and to those willing to pay a good part of their month's salary. Such fruits were a little freer on the market now in September 1991, but still exceedingly costly.

During the ten hours I had been in Czechoslovakia, every hour had been filled with some expression of friendship and helpfulness from train attendants, people on the street, and those in bureaus. One elderly woman closed her place of work, put her arm around me, and walked me down to the train to be certain I took the right one—all this without one word of a common language between us. My whole three-day sojourn there was one shower of love. 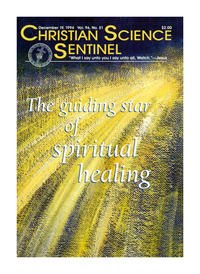