When the loudest sounds we hear are confusion and fear, maybe it's time to listen to the quieter, peace-giving message of God's angels.

I Feel as though everything is out of control!" That comment, with variations, is heard a lot these days. The "variations" might include fears about children, uncontrolled finances, home, business.

Perhaps our basic need, when life feels out of control and we seem helpless to do anything about it, is to think more deeply about the source of real control—God, divine Mind. Mrs. Eddy writes in the Christian Science textbook, Science and Health, "The real jurisdiction of the world is in Mind, controlling every effect and recognizing all causation as vested in divine Mind." This certainly is consistent with Christ Jesus' life and ministry. He never doubted that God was able to govern a situation. He never wondered if he had been given too much to do. In John we read that Jesus said, "The Son can do nothing of himself, but what he seeth the Father do: for what things soever he doeth, these also doeth the Son likewise." Both Jesus and Mrs. Eddy were plainly indicating that the control of man and the universe originates with God. 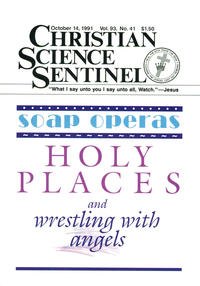