The media in recent times have highlighted the stories of hostages. Innocent children, women, and men held against their will often become pawns in political situations. An Irishman, Brian Keenan, a teacher in Beirut who was captured and held hostage for over four years, spoke recently of his ordeal at a news conference after his release. He commented wryly, "I continually told myself that they could only take my liberty, not my freedom."

There are other kinds of oppression too that keep people in prison. Some might as well be hostages because of the extent of fear in their lives, or unhappy family relationships, lack of income, or illness. Is there anything people can do to snap such chains of oppression?

Send a comment to the editors
NEXT IN THIS ISSUE
Editorial
God, no longer the great unknown 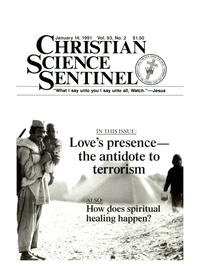