Spiritual individuality and worth

One of the great moments in my youth was when I was performing a comedy routine in front of the junior and senior classes at a high-school event. They were laughing uproariously, and the applause at the end made me feel I had the world at my feet. At that moment no one could have convinced me I was less than totally worthy. Of course, my sense of what genuine worth is all about has deepened since those days, in part as a result of struggles, times when a feeling of worth seemed a dream, far removed from the cold, hard "realities" of life.

Needless to say, we've all had occasions when we've been less than impressed with ourselves, when we've wrestled with the feeling that we're not particularly important or have little to offer. Such experiences can impel us to think more deeply about who we are and what really constitutes worth. We do ourselves a disservice to think in superficial terms about our value, to feel worthy, for example, simply because things are fine right now or because we have a respectable position—or to feel unworthy because we're apparently stuck in a miserable, dead-end situation. Yes, circumstances do have a way of pushing us around, of aggressively claiming to dictate our happiness or lack of it. Yet while it would seem that our worth is often dependent on factors beyond our control, there's a sense in which it's totally independent of such factors, whether they be hereditary or environmental or whatever. 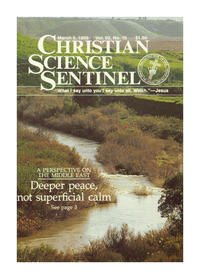