To be a "have" in God's economy

When we're feeling that we're "have-nots," it's time to realize just how bountiful God's resources are.

God's resources are infinite. This assurance shines through the healings and teachings of Christ Jesus. His parable of the prodigal son, See Luke 15:11–32 . for example, illustrates the ever-present availability of God's goodness. Both the prodigal and his brother felt themselves lacking at different points. Yet God's abundance didn't exclude them. Christian Science would say, however, that this abundance can be experienced only as one puts aside belief in a fleshly selfhood for the realization of what it actually means to be the offspring of the Father, God.

Jesus set forth the spiritual rule that brings God's plenty to light in human experience when he said, "For unto every one that hath shall be given, and he shall have abundance: but from him that hath not shall be taken away even that which he hath." Matt. 25:29. Jesus was not describing increasing inequalities in a worldly economy but declaring the abundance available in God's kingdom. Who is "him that hath not"? Surely the want to which men and women are subject is traceable to a more basic neediness than income. It's the sense that man is separated from God. It's this belief that is inherently lacking; because it is untrue, it lacks genuine substance. This belief is at the root of all human privation. But when it is removed—when "from him that hath not shall be taken away even that which he hath"— then the real man, the man of God's creating appears. This man "hath" sonship with God. As we learn from the two brothers' experiences in the parable of the prodigal, this man is heir to the Father's abundant love and care. And as we begin to grasp man's true worth as God's child, a change takes place in us and in the way we view and treat others. Surely this spiritual change can have a profound impact, both upon our own energies and dedication and upon the economy of which we are a part. 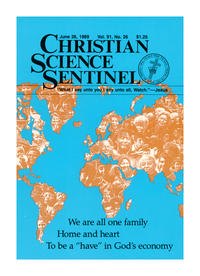