During a television tribute to him, a famous actor related an anecdote about his father. I remember his describing how his decision to give up a business career for acting met with his father's total disapproval. Each night when he came home from rehearsals, he was greeted with a "towering silence."

When opening night arrived, his father relented and attended with the rest of the family. Later that evening during a family discussion, one of the actor's sisters made a remark that was slightly critical. At this point the father said, "Leave him alone. He was perfect!" 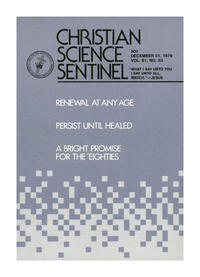