Over eleven years ago I became quite ill and called my boss to...

Over eleven years ago I became quite ill and called my boss to tell him I wasn't feeling well. The next two days I had the same report for him. My physical condition seemed to be deteriorating, although I was unable to explain what my problem was, as I had no diagnosis. By the following week I was unable to hold down my food. When I called my boss the next week, I felt I had to give him something he could convey to his superior. I said that it appeared to be an ulcer.

I was having prayerful treatment in Christian Science. Since the healing had not come as rapidly as other healings had in the previous fifteen years, the suggestion came that maybe a diagnosis would facilitate the practitioner's work. However, the practitioner assured me this would not be true. Labeling the illusion only makes the belief in the condition more tenacious. 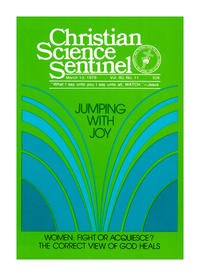