A few years ago I was troubled by a severe pain in my stomach. Then one day my daughter and my sister came to visit me and found that I was in pain. My sister is not a Christian Scientist and became fearful. She was afraid of hereditary illness and insisted that a doctor be called. But I told her I was not afraid. My daughter then called a Christian Science practitioner and asked for help through prayer.

The practitioner began her prayerful work, and I became much calmer. She told me that Life is God, Spirit, that my life is governed solely by good, God. Any other impression in thought—belief in sin, sickness, and death—has no reality. This truth we need to see. It is only a pure understanding of man, the perfect image of God, that will dispel the counterfeit. I was so grateful for her words, and I knew at that moment that everything was all right. The pain soon disappeared, and a few days later I was completely healed.

Send a comment to the editors
NEXT IN THIS ISSUE
Testimony of Healing
What a wonderful blessing to have a glimpse of the truth Christian Science... 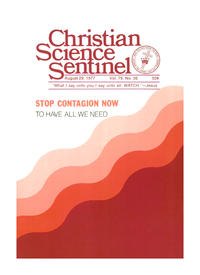