Recalling the many blessings I have had through the application...

Recalling the many blessings I have had through the application of the wonderful truth taught in Christian Science, I share the following healing.

Years ago when I first started attending a branch Church of Christ, Scientist, I had a growth on my face. It had not caused any discomfort until a dear neighbor remarked about it and insisted that it would be so simple to have a doctor remove it. She knew I was a student of Christian Science, so I told her I would much rather be healed through Christian Science. Later she mentioned it again in the presence of my husband. He also said I should make an appointment with a doctor. He was extremely opposed to Christian Science. At his insistence I made an appointment. While I was waiting to see the doctor, an emergency case came in, and my appointment had to be postponed. After three attempts to see the doctor, and having my appointment postponed each time, I went home, sat down, and quietly prayed and listened for guidance.

Send a comment to the editors
NEXT IN THIS ISSUE
Testimony of Healing
"Every word of God is pure: he is a shield unto them that put... 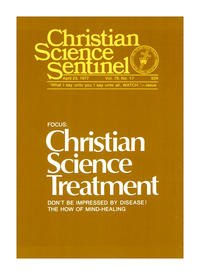