Almost two thousand years ago one individual, Christ Jesus, taught and demonstrated a solution for human problems. He taught others how to heal, and this healing practice was carried on by his disciples and to a degree by the Christian Church until about the third century. Jesus said that any individual who would believe in and understand his teaching and would follow him could do the same as he did: "Verily, verily, I say unto you, He that believeth on me, the works that I do shall he do also; and greater works than these shall he do; because I go unto my Father." John 14:12;

Over one hundred years ago Mary Baker Eddy discovered the Science of Jesus' teachings and later founded a church based on their spiritual and practical import. During the formative period a vote was taken "to organize a church designed to commemorate the word and works of our Master, which should reinstate primitive Christianity and its lost element of healing." Manual of The Mother Church, p. 17; Though this first founding was later dissolved, to be replaced by the Church of Christ, Scientist, as it exists today, this early statement of purpose points to the deep association of this church with the life and teachings of the master Christian.

Send a comment to the editors
NEXT IN THIS ISSUE
Article
Claim Your Spiritual Sonship! 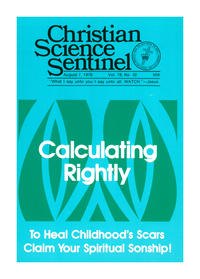