When Christian Science help was first offered me in 1919, I...

When Christian Science help was first offered me in 1919, I rejected this offer. Somewhat later I accompanied a relative to a Christian Science practitioner, but only to oblige my relative. However, in talking with the practitioner it was as if scales fell from my eyes, and I began to study Science and Health by Mrs. Eddy. In a short time I was healed of pulmonary disease and consumption, and I had a testimony about this in the February 1938 issue of The Christian Science Journal.

From then on thermometer and medications were laid aside and never used again. Another healing in our family occurred in this early period of study. As a small child, our youngest daughter had attacks the doctor was unable to diagnose, although they seemed of a serious nature. Shortly after we had taken up the study of Christian Science, the last attack occurred. Instead of employing the recommended medical means, I quietly prayed "the scientific statement of being" from Science and Health (see p. 468). The child drew a deep breath, went to sleep quietly, and was well from then on.

Send a comment to the editors
NEXT IN THIS ISSUE
Testimony of Healing
Mere words cannot adequately express my gratitude for the... 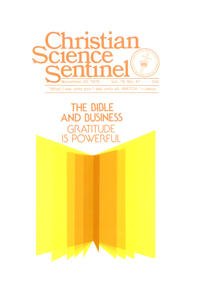