Related to the Lesson-Sermon for June 24, 1973, in the CHRISTIAN SCIENCE QUARTERLY Subject: Is the Universe, Including Man, Evolved by Atomic Force?

"Rock" as a descriptive term for Deity is used 33 times in the Old Testament. It called up vivid images to people of Bible lands. Rocks were natural places of refuge. They gave a firm footing. They cast shadows in the desert heat. 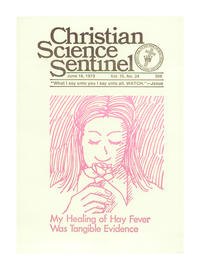