We Can Expect Miracles

Miracles are not events only of the past. When we grasp the spiritual definition of the word "miracle" as it is used in the Bible, we can see that we will have every reason to expect miraculous happenings to occur today. It is only because the miracles of healing related in the Old and New Testaments are not fully understood that they are either not now credited as true, or else thought to be the result of chance or trickery, or the phenomena of a supernatural power possessed by a few special people.

In the Glossary of Science and Health Mrs. Eddy has given a metaphysical explanation of the term "miracle" which conveys its spiritual meaning. It reads, "That which is divinely natural, but must be learned humanly; a phenomenon of Science." Science and Health, p. 591; Through this definition it becomes clear that in fact so-called miraculous events, instead of being exceptional, supernatural, extraordinary, are the normal outcome of the utilization of the spiritual law of God, eternal Principle. Consequently, it is perfectly reasonable to claim today the power to work miracles similar to those of Bible times. If one is aware of this law and putting it into practice, nothing could be more natural.

Send a comment to the editors
NEXT IN THIS ISSUE
Testimony of Healing
It is with the deepest gratitude that I submit the following... 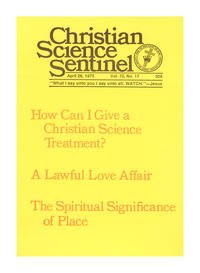