I would like to express my gratitude for Christian Science and...

I would like to express my gratitude for Christian Science and acknowledge the debt I owe its Discoverer and Founder, Mary Baker Eddy. I have experienced several healings through this Science, but there is one in particular I would like to tell about here. It concerns the healing of the tobacco habit.

I had been a cigarette "fiend" for a number of years. I had tried many times to break away from smoking, but without success. One day I sought the help of a Christian Science practitioner for a problem that had nothing to do with cigarettes. But during our conversation cigarettes were mentioned, and she wanted to know if I smoked. I told her that I did. Then she wanted to know if I wanted to get rid of the habit. I said I surely did, but that it was too much for me. She gave me silent prayerful treatment for about twenty minutes, and when I left her office, she asked me to be sure to let her know how I was progressing. 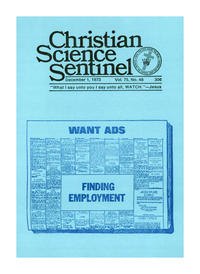