The Touch of God's Finger

When Christ Jesus healed a man who was dumb, there were people who wondered how he did it. They even accused him of casting out devils through Beelzebub, the chief of the devils. But Jesus assured them that his healing works were not done through mortal means but through divine power—a power that would bring them much more than mere physical relief. He said, "If I with the finger of God cast out devils, no doubt the kingdom of God is come upon you." Luke 11:20;

God's touch had long been recognized as an inspiring as well as a healing power—a touch that not only would heal but would also spiritualize human thought and lead to the Promised Land. According to the magicians of Pharaoh it was by the finger of God that Moses performed miracles in Egypt (see Ex. 8:19). And the Bible tells of the great Israelite leader himself receiving "two tables of testimony, tables of stone, written with the finger of God" Ex. 31:18; — the commandments which were to promote his people's progress Spiritward. Jesus' reference to "the finger of God" indicated the timelessness of the divine influence he exercised, and the power it included not only to heal but to reveal heaven.

Send a comment to the editors
NEXT IN THIS ISSUE
Testimony of Healing
For the past twenty-six years Christian Science has been my only... 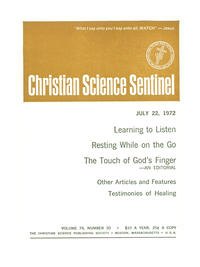