"Who is so great a God as our God?" (Ps. 77: 13.) Many years ago my father was healed in Christian Science of Pott's disease. This was the diagnosis of his condition by fifteen doctors. The disease was traced to an injury he had sustained as the surrey he and my sisters were driving overturned on him.

Like the woman mentioned in the Bible (see Luke 8:43), Mother and Dad spent everything they had, and my father was nothing bettered. A kind physician suggested he go to a midwestern city and have an operation performed by two leading specialists. Our parents took their worldly possessions and four little girls to a strange city with high hopes of finding healing.

Send a comment to the editors
NEXT IN THIS ISSUE
Testimony of Healing
For a period in my life I did not study Christian Science, and it... 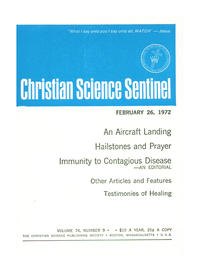