Through the study of Christian Science I have been blessed beyond...

Through the study of Christian Science I have been blessed beyond words. My family became interested in Science after we witnessed the healing of a cousin who became desperately ill soon after arriving at our home for a short holiday. Against his mother's wishes my mother telephoned for a doctor, as she felt she could not be held responsible for the child. However (in spite of the verdict of the case being of a serious nature), my aunt, the boy's mother, who was in business, insisted that the child was in God's care and there was nothing to fear. She advised us that she could not come immediately to fetch the lad but would come two days later at the weekend.

Even on the Sunday when she arrived, the lad was still in a raging fever, but my aunt remained quite calm. She talked to her son reassuringly as she dressed him and took him to the car. While we did not understand at the time, she was, in fact, continually declaring to the child the truth of God's care and presence. My parents were so concerned at the decision to remove the child that they decided to travel down to Durban, some fifty-six miles from our hometown, in another car in case help would be needed. How little we then knew that God needed no other help! Before getting halfway to Durban the lad was completely healed.

Send a comment to the editors
NEXT IN THIS ISSUE
Testimony of Healing
All during my younger days I was a very healthy girl, and that... 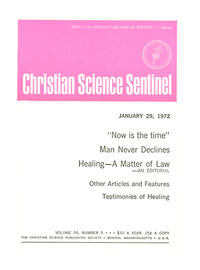