Christian Science and the Sciences

As perhaps never before in history mankind are questioning the traditional values on which they have depended for a useful present and a brighter future. No matter what periodic reverses and defeats they may have weathered during the centuries, they have, for the most part, maintained a hope, founded often on the promises of their varying religious, philosophical, or governmental heritage.

Recently such faith has waned, and solutions for most social and economic problems have been sought in developing technological research and exploration, often very arresting. These material means have been proudly displayed not only by the technicians themselves and the leaders of industrial and commercial enterprises but by the officials and teachers charged with the education of the rising generations. But they no longer elicit total confidence as the means of achieving a happier future for the race. Indeed, the result seems to be growing frustration on all levels of society, rebellion at times approaching anarchy. 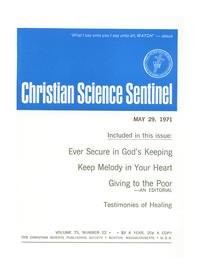