More than thirty-six years ago I was told by several medical...

More than thirty-six years ago I was told by several medical doctors that there was nothing more that they could do to help me. I was in a severe state of mental depression and despondency. I had to give up my business and the trade I had followed for thirty years, and i was without income. An ailing wife and a young daughter were looking to me for support. To complicate matters, I gambled and drank heavily.

It was then that I turned to God for help. The seed of Christian Science had been sown by my mother, who enjoyed having me read to her from Science and Health by Mrs. Eddy. I began to study the Bible and Science and Health. I asked a Christian Science practitioner for help, and together we began to see, through scientific prayer, that I was perfect reflection of perfect God. Although the healing did not take place immediately, I was grateful for the opportunity to study and to grow in my understanding of God. It was through the study of Christian Science that I was led to sell our house, move west, and begin an entirely new business. Shortly thereafter I was completely and permanently healed of the physical problem and the financial lack. I was also healed of the desire to gamble and drink.

Send a comment to the editors
NEXT IN THIS ISSUE
Testimony of Healing
With deep humility and much gratitude to God for His love for... 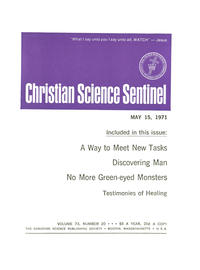