Christian Science was introduced to me by an insurance agent...

Christian Science was introduced to me by an insurance agent who used to call at our home before the Second World War. At that time I had had to leave my employment because of nervous fatigue, palpitation of the heart, and other nervous disorders, including a bad speech impediment, which made it very difficult for me to converse with people. I would avoid meeting people rather than try to talk with them.

Although I sometimes attended Christian Science church services, borrowed books from the library, and read Christian Science literature, it was quite two years later that I took up the study of Christian Science seriously, and then only after it became clear to me that the exercises and diet method of healing I was then practicing had failed to restore my health.

Send a comment to the editors
NEXT IN THIS ISSUE
Testimony of Healing
The importance of the lessons we learn as students in the Christian Science Sunday School... 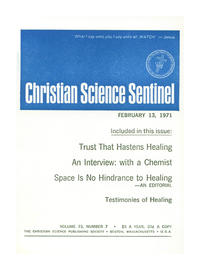