[The above is an abbreviated, postproduction text of the program released for broadcast the week of May 1-7 in the radio series, "The Bible Speaks to You." Heard internationally over more than 1,000 stations, the weekly programs are prepared and produced by the Christian Science Committee on Publication, Christian Science Center, Boston, Massachusetts, U.S.A. 02115.]

RADIO PROGRAM NO. 422 - Facing Up to a Choice of Careers

[The participants are Parker Thomas and Robert McKinnon.]

McKinnon: There are many factors involved in a student's deciding on a particular career. He has his own wants and goals, as well as the goals, drives, and sometimes coercive influence of his parents. He is influenced, too, by what professional counseling and testing say is best for him. It can be a very difficult time for a young person. 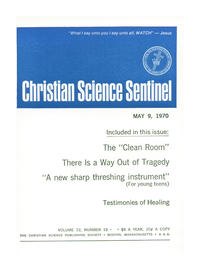