The words in this issue are related to the Lesson-Sermon in the CHRISTIAN SCIENCE QUARTERLY designated to be read in Christian Science churches on December 27, 1970.

Jerusalem was sometimes known as the "city of David" as it eventually became his capital; but in the present verse the primary reference is, of course, to the Bethlehem in which Jesus was born, as David himself had been, almost a thousand years earlier. 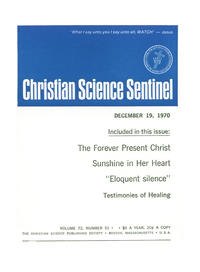