Christian Science was first offered our family in 1920, when the...

Maybelle A. Marr with contributions from Elsa H. Auerbach

Christian Science was first offered our family in 1920, when the physicians had given my mother a maximum of three weeks to live. She had had a series of surgical operations, long periods of hospitalization, and the condition had been diagnosed as incurable cancer. Christian Science was then presented to her, and from the very first moment the condition began altering. It became evident that this extremity was God's opportunity. In the intervening forty-eight years this has been proven beyond the shadow of a doubt. Ever since her healing, my mother has spent all the God-given years in faithfully following the footsteps of Truth and in serving the Cause of Christian Science in various ways.

The highlight in my own awakening to this glorious Principle occurred when I first attended a Christian Science lecture. In substance the lecturer stated that any problem is a state of limited thinking. And he showed that Christian Science gives one the means to attain spiritual understanding, the divinely intelligent way to meet problems. This so electrified my consciousness that it has continued to impel my individual progress from that moment to this.

Send a comment to the editors
NEXT IN THIS ISSUE
Testimony of Healing
On page 17 of No and Yes, Mrs. Eddy writes, "Man is the climax... 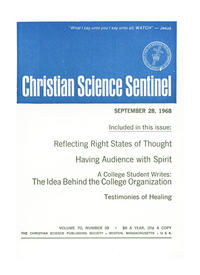