Christian Science has been my family's religion for four generations

Christian Science has been my family's religion for four generations. Physical difficulties, far too numerous to relate, have been healed down through the years, and many major and minor daily problems have been overcome.

When one of our daughters was a year and a half old, she became afflicted with eczema. My wife and I worked diligently, as we had been taught in Christian Science, to see the nothingness of this erroneous condition, but the disease began to spread. We engaged the services of a Christian Science practitioner, and the child began to improve. The healing did not come quickly, since much needful spiritual growth had to take place in our thinking regarding the child and we had to learn our real responsibility of seeing God as the only true parent. The passages in Science and Health on pages 412 to 414, where Mrs. Eddy discusses the handling of the needs of children, were particularly helpful. Soon the child was healed, and the healing has been permanent. This occurred nine years ago.

Send a comment to the editors
NEXT IN THIS ISSUE
Testimony of Healing
The study and application of Christian Science has been a joy... 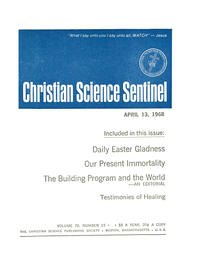