In 1889, Mary Baker Eddy gave Christian Scientists a small plot of land in the Back Bay area of Boston. When the time came for them to build a church, the original edifice of The Mother Church was erected here. Only twelve years later the vast Extension was needed. It could seat nearly 5,000 people. The small plot of land—originally less than one-fifth of an acre—had enlarged its borders to become three-quarters of an acre.

Today, as the seventy-fifth anniversary of the building of the Original Edifice approaches, Mrs. Eddy's gift of land—as in the Bible parable of the talents—has been put to good use and multiplied. The fifth of an acre has become more than 22 acres, serving both Christian Scientists and the community as a whole. On this site will be built the new Christian Science Church Center, headquarters for Christian Scientists in 58 countries and for 3300 branches. In addition, the perimeter of the Church Center area will be developed in accord with the highest goals of community renewal.

Send a comment to the editors
NEXT IN THIS ISSUE
Testimony of Healing
My deep love for Christian Science prompts me to share a few... 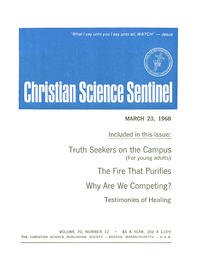