Christian Science healed me of scarlet fever when I was a child;...

Christian Science healed me of scarlet fever when I was a child; then I began to learn of God. Some years later I had an experience which enabled me to learn more of God's nature and ever-presence.

It began thirteen years ago in Japan. I sustained a bone injury in an accident and began to have difficulty walking. I applied Christian Science to this situation, but the pain continued until one night six months later I was ill and could no longer walk. I wrote to a Christian Science practitioner in the United States for help, and she began to pray for me.

Send a comment to the editors
NEXT IN THIS ISSUE
Testimony of Healing
I have recently had a healing in Christian Science of a nervous... 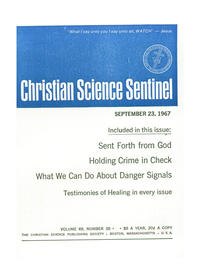