Some time ago while reading a 1927 Sentinel in a Christian Science Reading Room,...

Some time ago while reading a 1927 Sentinel in a Christian Science Reading Room, I became engrossed in a testimony written by a young man who told simply what Christian Science had done for him and his family. Some years after World War I, he was walking the streets of a western city. He was discouraged and despondent. He was in debt, without a job, and his young son, who wore braces on his legs, was considered a cripple.

As a result of turning to Christian Science, the young man's life was changed. Lack and limitation were exchanged for a concept of real substance. The crippled son was healed through Christian Science treatment.

Send a comment to the editors
NEXT IN THIS ISSUE
Testimony of Healing
"And the word of the Lord came unto me, saying, Son of... 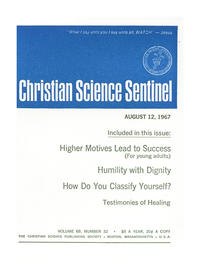