As a member of a local service club I volunteered to participate in...

As a member of a local service club I volunteered to participate in the annual local Service Club Olympics at the YMCA. After having participated in two swimming events, I became very weak. Many club members were spectators, and some, being friends, had observed my difficulty. At this point I was declaring spiritual truths to myself and holding to the following statement from page 393 of Science and Health by Mrs. Eddy: "Rise in the strength of Spirit to resist all that is unlike good."

After reaching the men's locker room, I began losing consciousness. A friend asked if he could call a doctor. I assured him that I was all right and that I would appreciate his bringing to me a Christian Science friend of mine who was there. This he did. The Scientist had already heard of my difficulty and had called a practitioner.

Send a comment to the editors
NEXT IN THIS ISSUE
Testimony of Healing
When I was a young girl, my father was healed instantaneously... 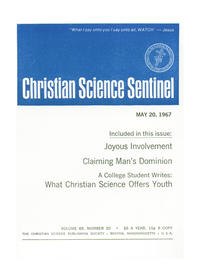