Since my sister and I were introduced to Christian Science, many...

Since my sister and I were introduced to Christian Science, many wonders have taken place in our experience. We began to study Science about 1930. This happened after a dear brother found the religion and shared it with those about him. We later joined The Mother Church and a branch church. Both of us have had the privilege of class instruction.

My sister once was seriously ill. She spent many sleepless nights because breathing was difficult. Her body became swollen, and the symptoms included weakness and hemorrhaging. Yet she clung to the truth as taught in Christian Science.

Send a comment to the editors
NEXT IN THIS ISSUE
Testimony of Healing
I am very grateful for all the good our family has enjoyed because... 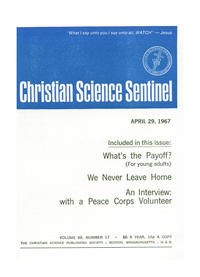