[The above is an abbreviated, postproduction text of the program released for broadcast the week of July 15–21 in the radio series, "The Bible Speaks to You." Heard internationally over approximately 1,000 stations, the weekly programs are prepared and produced by the Christian Science Committee on Publication, 107 Falmouth Street, Boston, Massachusetts 02115.]

RADIO PROGRAM NO. 224 - Facing the Challenge of Military Training

Announcer: To the young man drafted into military service, it often looks as if the civilian world of family and friends has suddenly been swept away. He faces the immediate challenge of adjusting to what may seem to be a completely different and difficult way of life.

Questioner: I'm sure that everyone who has worked with young men in the service knows how much of an adjustment is demanded of them. What would you say to a fellow who had just been ordered to report for induction to help him over the hurdles of those first days and weeks? 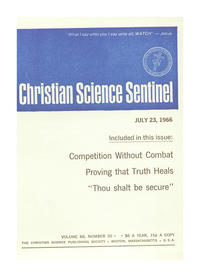