The Challenge of the Twentieth Century

Christian Science is based on an infinite, ever-operative divine Principle that is self-enforcing. This inexorable Principle, or God, functions eternally for the accomplishment of good and makes Science and Christianity coincident. The challenge of the twentieth century is to awaken all humanity to the benefits of scientific Christianity.

Every century has within itself the seed of that which sets it apart from every other. Because of human use or misuse of opportunities each age appears to leave an impression of progress or retrogression. The centuries in which good has most noticeably appeared are dramatically seen to be the one in which Moses lived, the first century of the Christian era, the period of the Reformation, and the nineteenth and twentieth centuries. 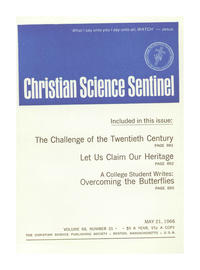