Reach for the Best!

A Christian Science Minister for the Armed Services befriended a young aviator and his wife during World War II and constantly challenged their standard of thought and action with the injunction, "Always reach for the top drawer!" Instead of settling for mediocrity, they were thus inspired to measure every course of action with the question, "Is this a standard worthy of the child of God?" In making decisions they asked themselves. "Which is the best, the highest way?" As a result, their progress, both spiritual and human, was marked.

Christ Jesus, the example for all Christians, consistently held to the highest concept of man as spiritual and perfect, and he demonstrated this concept in remarkable healings of the dread diseases of his day, as well as in the healing of sin and the overcoming of death. Unless we are accepting this concept of man in God's likeness for ourselves and others, we are not reaching for the best. 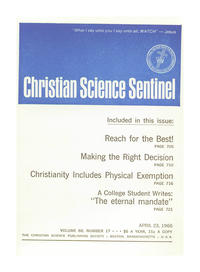