In the third chapter of Acts is recorded the healing of a lame beggar. The presence of beggars was a common sight, but something in this case stirred Peter and John to pause on their way into the temple.

As the lame one appealed for alms, Peter declared, "Silver and gold have I none; but such as I have, give I thee." What Peter had was the understanding of man's inviolate nature as the son of God, and in compassion he reached out and helped to his feet the man lame from birth. 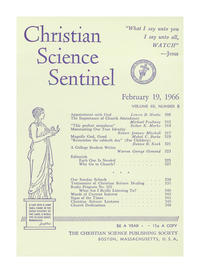