A young man joining the Christian Science organization at a university, when asked to tell of a healing accomplished through his own work, said that he was hard pressed for an answer. The reason was that he had attended the Christian Science Sunday School from the time he was three. There he had been told that he was the perfect child of God and that he was constantly under God's protecting care. He said, "I believed it." Consequently, he had had none of the so-called childhood illnesses, and his conviction of God's constant care sustained and protected him when he grew to maturity and traveled extensively all over the world during his military service and business and pleasure trips.

How important it is for us to believe God's promises, to accept without reservation the fact that God made man in His image and likeness and gave him dominion and pronounced His creation good! A little child accepts wholeheartedly the truth his parents and teachers tell him because he has confidence in them. Should we not accept in the same way the Word of God and have the same unquestioning confidence in it? Then, having accepted the truth, we can go on to prove by application its validity. 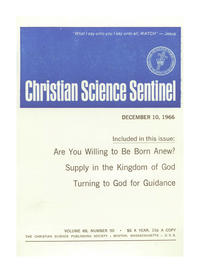