It is with a deep sense of gratitude for Christ Jesus, for Mrs. Eddy...

It is with a deep sense of gratitude for Christ Jesus, for Mrs. Eddy, the Discoverer and Founder of Christian Science, for my parents, who brought me up in this wonderful religion, and mostly for God, the All-in-all, that I testify to His healing power.

A few years ago I was plagued by a wart on my left hand. Because few people noticed it, I dismissed it as unimportant. Soon a second wart appeared on that hand. Then I really began applying the truth. From Science and Health by Mrs. Eddy, I learned that God is omnipresent. This sentence was particularly helpful to me (p. 393): "Have no fear that matter can ache, swell, and be inflamed as the result of a law of any kind, when it is self-evident that matter can have no pain nor inflammation." The only law that said the warts were real was an erroneous one—a lie. When I understood these truths clearly, the first wart disappeared, and soon the second was gone too.

Send a comment to the editors
NEXT IN THIS ISSUE
Testimony of Healing
As a young student of Christian Science I have had many healings... 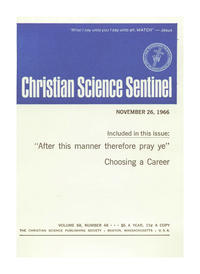