"What am I seeing?" We should ask ourselves this question often, for frequently we aren't seeing what God sees. We know very well that He doesn't see a sick man or a lacking man or an unhappy man. But mortals do. They see, or think they do, things that have no place in true consciousness. This view of things misrepresents God and His creation. Christian Science explains that things seen by the mortal senses are illusions, not facts. It's obvious that an illusion is no more real than a belief; it's actually nothing at all. But to the believer it's something. 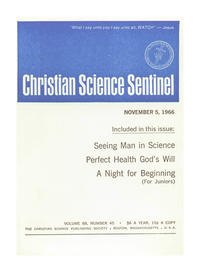