Hearing the Voice of Truth

Mrs. Eddy writes in Science and Health (pp. 213, 214), ''Before human knowledge dipped to its depths into a false sense of things,—into belief in material origins which discard the one Mind and true source of being, —it is possible that the impressions from Truth were as distinct as sound, and that they came as sound to the primitive prophets."

The Bible records many instances when "the impressions from Truth" were heard distinctly and "came as sound to the primitive prophets," as they did centuries later to Christ Jesus and the apostles. 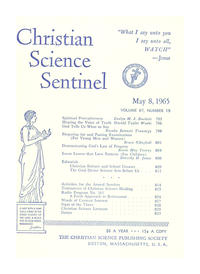