Tom, who is a Christian Scientist, has learned that God is infinite Love and that he is God's beloved child. He has also learned that error of any kind is unreal.

Tom always relies on Christian Science for healing. Usually his problems are met quickly. But for several years there were ugly red warts on his arm and fingers. At first they did not bother him, and neither he nor his parents did any consecrated work in Christian Science to demonstrate their unreality. Later the difficulty seemed so much a part of him that he became discouraged about getting rid of it. 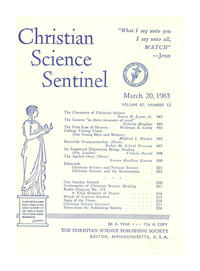