I was not one who came to Christian Science with a sudden rush of understanding. I heard about it through an office colleague who knew that I was going through great tribulation just before the outbreak of World War II.

I did not come for a physical healing, but I was healed of constipation, from which I had suffered since childhood and which I had been told would persist and would entail constant medication. I had had this medication for many years. I was healed of the condition in three weeks, just through thinking of and accepting the words of the practitioner, who was prayerfully helping me.

Send a comment to the editors
NEXT IN THIS ISSUE
Testimony of Healing
I have had many beautiful... 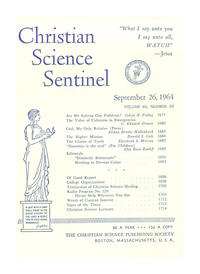