"Is any sick among you? let him call for the elders of the church; and let them pray over him, anointing him with oil in the name of the Lord: and the prayer of faith shall save the sick, and the Lord shall raise him up." This comforting assurance is found in the Epistle of James, fifth chapter. For nearly a century Christian Scientists have been proving the value of such healing prayer. In fact, Christian Science is dedicated to the ministry of Christian healing.

Because of their successful experiences, Scientists look appreciatively upon the increasing number of denominations in which healing through prayer is becoming an accepted and important part of Christian ministry. They cannot help but see in this the beginning of the fulfillment of a prediction made near the end of the last century by Mary Baker Eddy, the Discoverer and Founder of Christian Science (Pulpit and Press, p. 22): "If the lives of Christian Scientists attest their fidelity to Truth, I predict that in the twentieth century every Christian church in our land, and a few in far-off lands, will approximate the understanding of Christian Science sufficiently to heal the sick in his name." 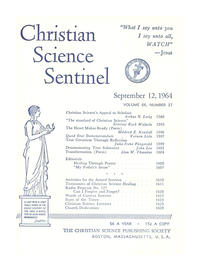