One day Debbie, who is a Christian Scientist, was faced with an opportunity to prove the truth which she had been taught ever since she could remember: that God is Love and that He cares for His children wherever they may be.

Debbie had ridden her bicycle to her swimming lesson and had somehow hit a rock or loose gravel which made the bicycle turn sharply; and the next thing she knew, she was on the ground with her arm caught in the spokes of the front wheel. The mothers of some of her friends were there, and immediately they came to release her arm from the wheel, and one of them offered to take her home. But because she knew that God was caring for her, Debbie took the swimming lesson and returned home on her bicycle as usual. 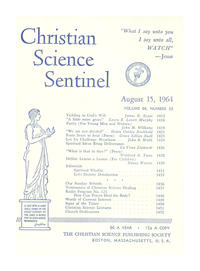