Confronted with a pressing problem, a Christian Scientist endeavors to gain a sound grasp of the situation; then he applies his understanding of divine Truth, thus bringing to bear upon the problem Truth's redemptive and healing power. It makes no difference whether the problem is personal, national, or international.

Take, for example, what is referred to as the racial problem in the United States, a problem that has its roots in a chapter of this country's history which has been closed but not expunged. Nearly one hundred years ago the institution of slavery was abolished here, but a residual problem remains, the solution of which will require the exercise of the best qualities of both races, namely the part of the problem that has been left over for the present generation seriously to come to grips with and to solve in a sound Christian manner. 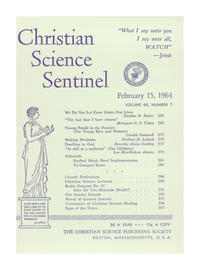