I was introduced to Christian Science...

I was introduced to Christian Science about twenty-six years ago by a friend after I had told her that my mother, who was very ill, had experienced a stroke and was unable to move her arm and leg. This friend spoke to me of Science and said it could heal my mother. She loaned me a copy of the textbook by our Leader, Mrs. Eddy.

I took my mother to a practitioner's office, and treatment was asked for. A short time later my mother was able to move her hand and to walk more freely, and sometime later she could lift her hand above her head and walk as freely as before.

Send a comment to the editors
NEXT IN THIS ISSUE
Testimony of Healing
In 1886 when I was three years... 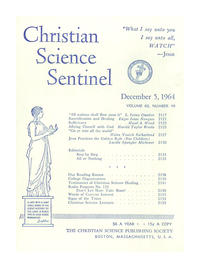