It is my desire to express sincere...

It is my desire to express sincere gratitude to God for Christian Science and for what it has done for me and my family. As a result of a healing my grandmother experienced before I was born, my mother became interested in Science. My grandmother, who had been given three months to live, was instantaneously healed of what the doctors in those days called quick consumption. My mother had Christian Science treatment at my birth, and I was enrolled in a Christian Science Sunday School at an early age. As a child I was healed of smallpox. The healing was so complete there is not even a scar remaining.

To me one of the outstanding proofs of the effectiveness of Science occurred when my husband, who was in the military service, was ordered to an Oriental country, and our two young children and I accompanied him. For the first time in my life I found myself in surroundings where there were no practitioners, no Christian Science church, and apparently no other student of Science. I realized that I had to rely wholly upon my own understanding of God. At first the difficulties, both physical and otherwise, seemed insurmountable.

Send a comment to the editors
NEXT IN THIS ISSUE
Testimony of Healing
When Christian Science was... 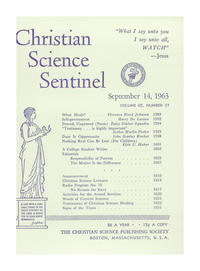