One year, after the long summer holiday, Bryan started to attend a new school where he was among boys and girls several years older than he. One day he was late getting home from school; and when his mother asked him the reason for this, he explained that one of the bigger boys had been bullying him. In order to avoid meeting this boy, Bryan had left school by a back gate and had taken a much longer route home.

The same thing happened on several afternoons, and Mother realized that Bryan was experiencing considerable fear. The next time he arrived home late, she asked him to bring her the Bible and Science and Health by Mrs. Eddy. 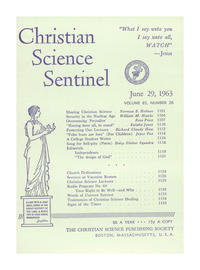