In December, 1941, I asked a school friend if he would like to go into the electronics manufacturing business with me to help the war effort. Although neither of us had had any previous management experience, a partnership was formed, and we immediately obtained a military subcontract. My associate agreed to build machines and handle the construction of facilities. I would design the machines and products, having had amateur radio experience for many years. I put my limited understanding of Christian Science to the test and was able to master personnel problems as well as those of finance.

As some profit began to show, as well as the possibility of far greater gains, a cleavage began to appear. My strict attitude toward high quality met with opposition, since this would reduce the profit. My partner decided to have me removed by showing the employees I was hindering the war effort. His final act was to initiate a sit–down strike which would be followed by military endorsement of his actions.

Send a comment to the editors
NEXT IN THIS ISSUE
Testimony of Healing
Mrs. Eddy's statement in the... 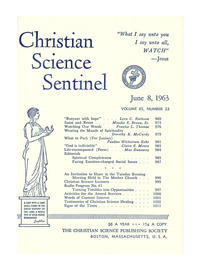